Updated monthly data last week from the U.S. Department of Agriculture provided additional insight into how the ongoing U.S. trade dispute with China is impacting the soybean market.  Today’s update looks briefly at portions of the USDA data, as well as recent news articles that have discussed U.S. agricultural export variables, and ongoing trade issues with China.

On Thursday, the World Agricultural Outlook Board’s (WAOB) November World Agricultural Supply and Demand Estimates (WASDE) report stated that, “Soybean exports are reduced 160 million bushels to 1,900 million with lower imports projected for China. The forecast protein consumption growth rate for China is reduced, which is reflected in the limited number of U.S. export sales this fall.

Although sales to China are minimal, strong sales to other markets are expected to continue, which is likely to result in a larger share of U.S. exports in the second half of the marketing year.

“With lower exports and slightly higher crush, soybean ending stocks are projected at 955 million bushels, up 70 million.”
Thursday’s update added, “The U.S. season-average soybean price range is forecast at $7.60 to $9.60 per bushel, unchanged at the midpoint.”
More broadly, the WAOB noted that, “Global soybean exports are reduced 2.0 million tons to 155.4 million. Lower U.S. exports are partly offset by a 2-million-ton increase for Brazil and higher shipments out of Ukraine and Russia. With limited U.S. commitments to China so far this marketing year, China’s soybean imports are lowered 4 million tons to 90 million.” 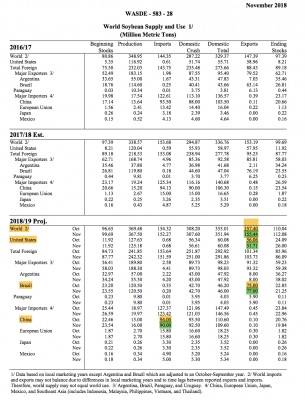 FAS pointed out that,

Since the beginning of the current trade tensions, purchases of U.S. soybeans by China have evaporated, with many previously booked sales being canceled.

“The few quantities that were shipped after the imposition of duties have either been diverted to other markets (Vietnam, Singapore, and South Korea) or are currently languishingoff the coast of China, waiting to be discharged. With Chinese buyers showing little interest in U.S. soybeans, this month’s reduction in the forecast in China’s imports is reflected in a similar reduction in the U.S. export forecast.”
While addressing soybean export sales, the FAS update stated that, “For the week ending November 1, U.S. 2018/19 soybean export commitments (outstanding sales plus accumulated exports) to China totaled 977,000 tons compared to 17.1 million a year ago. Total commitments to the world were 21.8 million tons, compared to 31.5 million for the same period last year.” 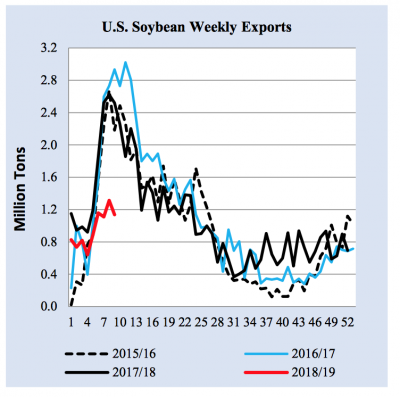 The FAS update added that, “Accumulated soybean exports in the new marketing year were at 8.6 million tons, which is 41 percent below the same period last year. Accumulated soybean exports to China were at 407,000 tons, which is 96 percent below or 9.9 million tons less compared to last year. Shipments to the rest of the world were 71 percent above last year’s (2.5 million tons more); however, they have not fully offset reductions for China.”

Rather than selling the crop right away as they pull it out of the ground — as they do almost every harvest season to pay the bills — they are instead stashing it in silos, containers, bins, bags, whatever they can get their hands on to keep it safe and dry.

“The hope is that over the next few months, trade tensions will ease, and China, the top market for the oilseed, will start buying from American farmers again, lifting depressed prices in the process. A bushel of soybeans fetched just $8.87 on Friday. Eight months ago, before trade tensions led to tariffs, it was about $2 more.” 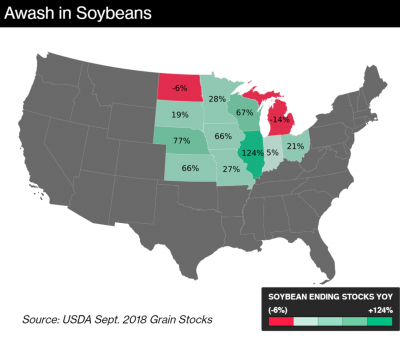 The Bloomberg writers pointed out that, “The risks are great. While futures trading indicates higher prices next year, that could change depending on trade negotiations and rising supplies. Moreover, the crop could go bad on them. Soybeans are not corn. They don’t store nearly as well. If not kept super dry, they can take on moisture fast. Rot quickly follows, making them worthless — and gross.”
“For some farmers, there is little choice but to keep their harvest. Millions of bushels have nowhere to go. Terminals in Portland, a key outlet in the Pacific Northwest to ship to China, are rarely offering bids. Supplies are backed up at terminals and elevators, even as cold, wet weather in North Dakota has left many acres unharvested,” the Bloomberg article said.
And last week, Bloomberg writers Anatoly Medetsky and Megan Durisin reported that, “In the search to replace U.S. soybeans, China is turning to Russia.
“Russia plans to increase production of soybeans in the Far East for deliveries to China, Prime Minister Dmitry Medvedev told reporters in Beijing. The two countries are also planning to work more closely on other agriculture products, including rice, pork, poultry, fish, and to develop logistics. 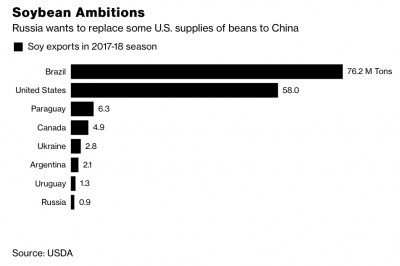 The Bloomberg writers explained that, “While Russia is a tiny supplier of soybeans, the move shows one of the effects of the U.S. trade war is closer Chinese and Russian ties. China has also been looking to diversify its sources of food as part of a broader Belt and Road initiative that’s backed by hundreds of billions of dollars for infrastructure projects.”
Wall Street Journal writer Nathaniel Taplin reported Friday that, “China isn’t buying many American soybeans anymore. But at least there’s Iran.”
The Journal article stated that, “Meanwhile another U.S. geopolitical rival Iran, which in the first half of 2018 bought no U.S. soybeans at all, is taking advantage of deep discounts on American beans to stock up: It bought $140 million worth in August, becoming the top foreign customer for the month according to U.S. Department of Agriculture data. In September, it bought another $44 million, nearly twice as much as China.”
Also, a recent article at The Economist Online stated that, “America’s farmers are at the centre of President Donald Trump’s trade war. More than a fifth of agricultural exports face new tariffs. From January to September pork exports to Mexico and China fell by 31% and 36%, respectively. Sales of soyabeans, America’s biggest farm export, to China have plunged by 98% since January.” 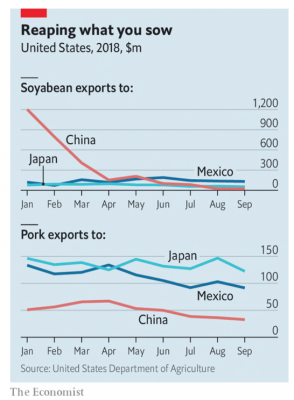 The article noted that, “It is all reminiscent of the 1980s, when America suspended grain sales to the Soviet Union, interest rates rose, incomes sank and many farmers left the business. For now debt levels are climbing but still manageable.

But much depends on how long tariffs persist. By the time the trade war ends, they may have caused enduring harm.

Despite this potential for “enduring harm,” Wall Street Journal writer Nathaniel Taplin reported Thursday that, “Still, Tuesday’s election results show that Mr. Trump’s rural base isn’t punishing him too harshly. That bodes ill for a meaningful Sino-U.S. trade settlement, hopes of which have boosted global markets ahead of a planned meeting between Mr. Trump and Chinese leader Xi Jinping at the Group of 20 summit that starts Nov. 30. Of 19 competitive House of Representatives races in the Midwest and Southeast involving counties with annual soybean production of over two million bushels, 10 went for Republicans and nine for Democrats. It is hard to interpret that as a clear indictment of Mr. Trump’s trade policy.” 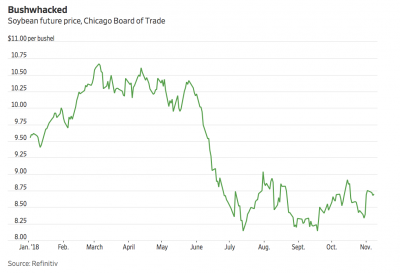 And more narrowly on the Group of 20 summit meeting between the U.S. and China, Washington Post writer Heather Long reported last week that, “Trump trade adviser Peter Navarro said Friday that ‘trust issues’ with China are responsible for the lack of progress in trade negotiations, tamping down hope for progress in resolving the trade war when President Trump and Chinese President Xi Jinping meet later this month at the G-20 summit in Argentina.

“Navarro also accused Xi of sending ‘globalist billionaires’ to urge Trump to cut a bad deal to resolve the conflicts, saying the strategy would fail.”

The Post article added that, “The Chinese have offered to buy more U.S. agricultural and energy products, but Navarro said Friday that is not enough. During the talk, he put on the screen behind him a lengthy list of grievances about unfair Chinese trade and business practices that included China stealing U.S. intellectual property and manipulating its currency.

“‘This is not about buying more soybeans or more coal. This is structural,’ Navarro said. ‘If you took 25 things off that list, there would still be enough things to hurt us.’”