As policy observers anticipate a meeting later this month between President Trump and China’s President Xi Jinping at the Group of 20 summit in Buenos Aires, recent news items continue to highlight the adverse impacts ongoing trade disputes are having on some sectors of the U.S. agricultural economy.  The trade war is also providing economic incentives for robust Chinese investment in its domestic agricultural production.

Reuters writers Mark Weinraub and P.J. Huffstutter reported last week that, “U.S. farmers finishing their harvests are facing a big problem – where to put the mountain of grain they cannot sell to Chinese buyers.”
The article explained that,

Across the United States, grain farmers are plowing under crops, leaving them to rot or piling them on the ground, in hopes of better prices next year, according to interviews with more than two dozen farmers, academic researchers and farm lenders. It’s one of the results, they say, of a U.S. trade war with China that has sharply hurt export demand and swamped storage facilities with excess grain.

Weinraub and Huffstutter indicated that, “Farmers are feeling the pinch. Those in central Illinois could pay up to 40 percent more than in previous years to store crops over the coming weeks, agricultural consultant Matt Bennett estimated.
“That amounts to between 3 cents to 6 cents a bushel, Bennett said, a painful expense for a crop that was already expected to deliver little income to farmers.” 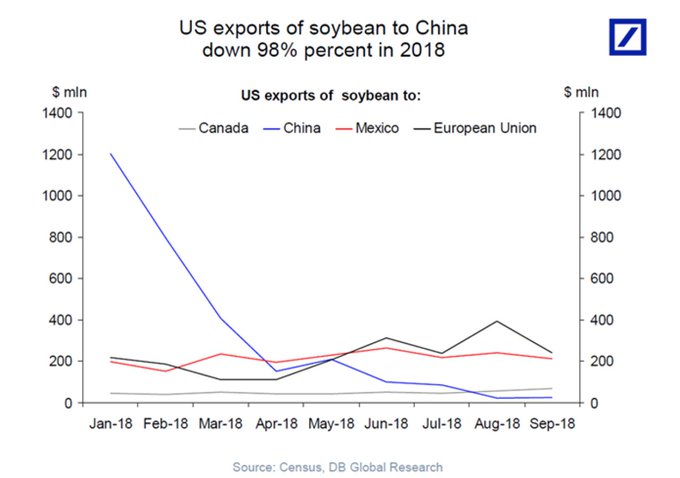 The Reuters article added, “Even before this fall’s harvest, around 20 percent of total grain storage available in the U.S. was full with corn, soybeans and wheat from previous harvests, according to the U.S. Department of Agriculture. That was the highest in 12 years for this time of year.” 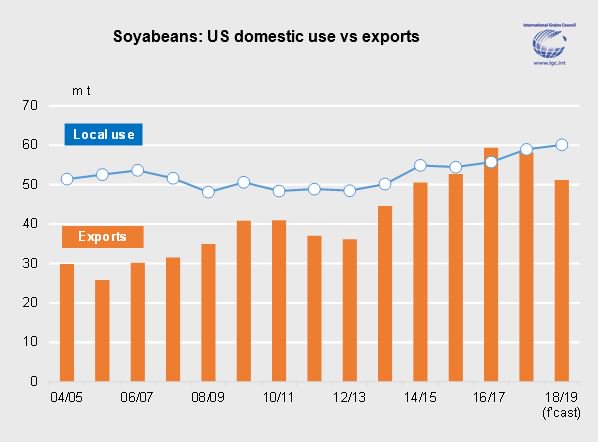 With ample supplies available for processing due to a sharp fall in exports, 2018/19 domestic #soybean use in the US could reach a record 60.1m t and exceed exports by 9.0m, the most in six seasons. 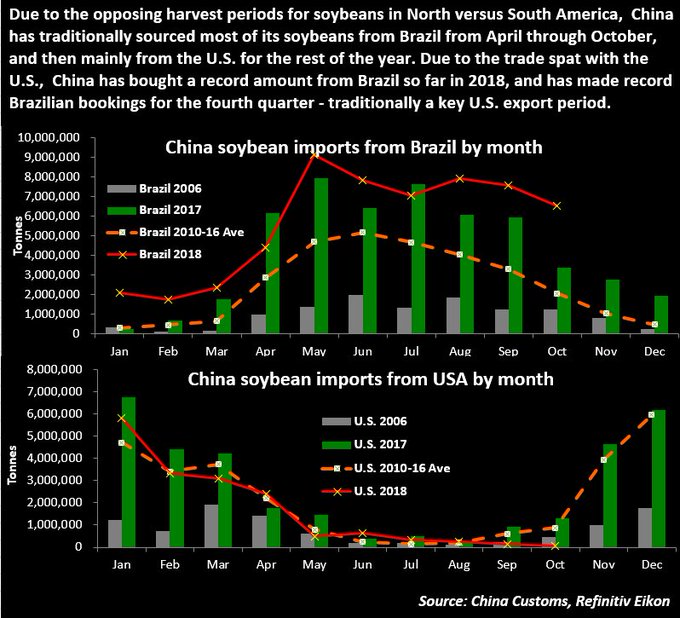 The Reuters article stated that, “China’s splurge on Brazilian beans in recent months has led to big stockpiles of soymeal and soybeans that have alleviated worries of a feed shortage for the world’s biggest pig herd.”
Nonetheless, John W. Schoen and Isabel Soisson reported recently at CNBC Online that, “Of the 36 congressional districts with soybean plantings of more than half a million acres, all but five will send Republicans to the next Congress. But the GOP margins of victory tightened in most of those districts, part of a broader ‘blue shift’ in voter turnouts during the recent midterm election.” 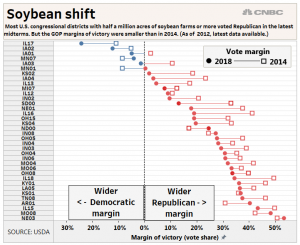 In a radio discussion last week on “1A,“ Ted McKinney, the USDA Under-secretary for trade and foreign agricultural affairs, stated that, “Our hearts go out to the farmers.  We understand exactly where they are. We just need a little more time to negotiate.”
He also noted that, “China has been lying to us about biotechnology, intellectual property.  The president is rightfully saying we seek free, fair trade that abides by the rules.”
And Bloomberg writer Mario Parker reported recently that, “The Trump administration plans to push for a commitment from China to resume imports of U.S. soybeans in any trade accord reached between the world’s two largest economies, a top agricultural official said [on November 15th].” 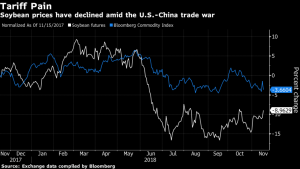 The Bloomberg article noted that, “While the U.S. has been pushing for higher sales of agricultural products generally, U.S. Deputy Secretary of Agriculture Steve Censky said any trade pact would also address the resumption of soybean sales specifically, since that was targeted in the trade war.”
Separately, Reuters writers Hallie Gu and Dominique Patton reported Friday that, “China’s imports of sorghum slid in October to a trickle, customs data showed on Friday, amid ongoing trade tensions with top exporter the United States.

Imports of sorghum, mostly used in China to feed the its massive livestock herd, fell to 20,000 tonnes, down 94 percent from a year earlier, according to data from the General Administration of Customs. The decline follows a 77 percent drop in September.

The Reuters article indicated that, “Beijing slapped a 25 percent duty on imports of the grain from the United States on July 6, in retaliation over similar trade measures taken by Washington. 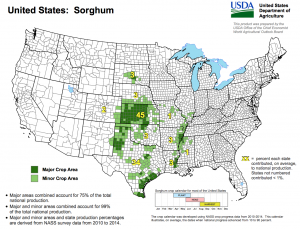 “The United States is by far China’s top sorghum supplier, accounting for 94 percent of its imports last year.”
Meanwhile, on the “PBS NewsHour” television program last week, Jim Mulhern, head of the National Milk Producers Federation, indicated that, “Dairy farmers are now in their fourth year of poor prices. The last good year we had was 2014. And the last four years have really been difficult. It was starting to look better this year, when some developments in the — on the trade policy front kind of threw a wrench into things and have created some real problems financially for dairy farmers.” 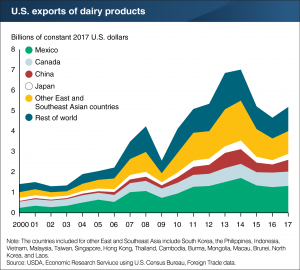 Mr. Mulhern added, “So, the tariff mitigation package announced by the secretary of agriculture this summer has provided a little bit of relief, but it has come nowhere close to covering the kind of damage that is being done.
“In the package announced so far, the first round of payments was $127 million made available for dairy farmers. That’s against a loss of $1.5 billion. So, you can see the magnitude…”
Adam Belz reported Friday at the Minneapolis Star Tribune Online that, “Dairy farmers in Minnesota sent a letter to U.S. Secretary of Agriculture Sonny Perdue this week arguing that the government aid is not enough to offset losses from the trade war.

“Nearly one out of 10 Minnesota dairy farmers have exited the business in the past 12 months, according to the Minnesota Milk Producers Association, and retaliatory tariffs by China and others against the U.S. have exacerbated an already dire situation.”

Wall Street Journal writer Dominique Fong reported last week that, “To keep bugs from spoiling her wheat and corn, Wei Junxia walks her plot of land spraying pesticide from a container on her back.”
“A neighbor uses an even simpler tool to boost production: a plastic tube jammed into a bag of fertilizer that she hoists over her shoulder.
“The two women are among roughly 280 million people employed on farms in China, more than 100 times as many as in the U.S., according to government figures. Chinese agriculture is dominated by small farms with low crop yields; the average Chinese farm is less than two acres, according to experts—a stark contrast with 400 acres in the U.S.

But the trade dispute between the U.S. and China is giving Beijing fresh motivation to make the country’s farms more efficient. China has imposed tariffs on American soybeans, wheat and other crops in retaliation for U.S. tariffs on Chinese goods, making those imported crops more expensive and highlighting the country’s dependence on foreign growers.

The Journal article stated that, “President Xi Jinping toured large-scale farms in fertile northeastern Heilongjiang province in September to drive home the message that increased domestic production of staple foods such as grain can help bolster China’s economy amid the trade war.” 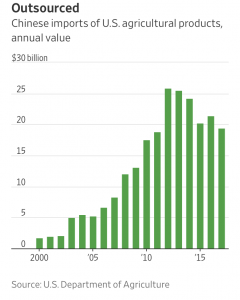 The Journal article also pointed out that, “In September, China’s cabinet, the State Council, unveiled a five-year plan to raise farm productivity and increase rural incomes, among other goals. Upgrading farm machine and equipment is one of the 10 goals in a separate ‘Made in China 2025’ plan.”
Lastly, Reuters writers Yawen Chen and Ryan Woo reported last week that, “China rejected fresh U.S. accusations of perpetuating ‘unfair’ trade practices and urged Washington on Thursday to stop making provocations, showing little sign of backing down days ahead a high-stakes meeting between leaders from both countries.”