Graph from the Federal Reserve Bank of Chicago, AgLetter (November 2018).

The Ag Letter noted that, “Agricultural land values would have experienced more downward pressure in the absence of exceptional crop yields. In 2018, District-wide corn and soybean yields jumped to all-time highs (198 bushels per acre for corn and 59 bushels per acre for soybeans).”
In addition, Thursday’s update pointed out that,

Once more agricultural credit conditions for the District seemed worse relative to a year ago. The availability of funds for lending by agricultural banks was lower than a year earlier for the fifth quarter in a row.

“For the July through September period of 2018, repayment rates on non-real-estate farm loans were yet again lower than a year ago.”

The Chicago Fed update added, “For the sixth year in a row, crop net cash earnings were expected to contract over the fall and winter from their levels of a year earlier, based on the predictions of survey respondents…[and]…An Iowa respondent emphasized the ‘concern from row crop farmers regarding interest rate increases next year and low commodity prices.’ This concern was echoed by livestock operators. So, there was a decidedly downcast outlook for agriculture based on the latest survey responses.”

The Agricultural Finance Monitor stated on Thursday, “For the nineteenth consecutive quarter, a majority of agricultural bankers in the Eighth Federal Reserve District reported that farm income had declined compared with a year earlier. Bankers also reported that farm household spending and capital expenditures remained below year-earlier levels in the third quarter.”

With respect to land values and cash rental rates, The Monitor noted that,

The St. Louis Fed also indicated that, “U.S. soybean prices have fallen sharply since the Chinese government imposed tariffs on imports of U.S. soybeans in late July. Some industry analysts have since speculated that U.S. soybean producers would delay the marketing (selling) of all or part of their crop in the hope of a rebound in prices. Thus, the third special question asked bankers to assess the validity of this speculation. A little more than half of respondents (54.5 percent) reported that soybean producers in their area plan to delay selling all or part of this year’s or next year’s crops, while a little less than half of bankers (40.9 percent) believe that there will be no change in farmers’ marketing plans for this year’s crop.”

Cortney Cowley and Ty Kreitman, writing in Thursday’s Ag Credit Survey from the Kansas City Fed, noted that, “The decline in farm income accelerated slightly in the third quarter. Heading into the fall harvest, prices for most major commodities remained lower than a year ago amid elevated supply expectations and ongoing trade disruptions. Throughout the Tenth District, more than half of bankers reported lower farm income compared to a year ago, while less than 5 percent reported higher income. The drop was sharpest in states with higher concentrations in corn and soybeans.” 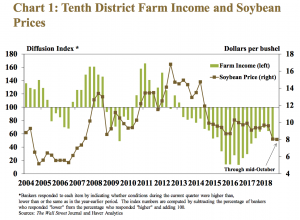 The Survey pointed out that,

U.S. soybean exports to China were down 91 percent in the third quarter, elevating concerns that fourth-quarter exports also could decline significantly.

“More than 70 percent of respondents anticipated lower income in the next three months in Missouri and Nebraska, states where soybeans comprise 27 and 15 percent of farm revenues, respectively.”
The Fed update explained that, “Despite prolonged weaknesses in the farm economy and recent declines in farm income, cash rents have decreased only modestly and have appeared to stabilize in recent quarters.” 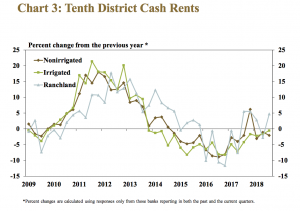 The KC Fed also pointed out that, “The prolonged period of depressed farm income has placed more pressure on borrower balance sheets. According to bankers across the District, a majority of crop producers in 2018 had a modest deterioration in working capital.” 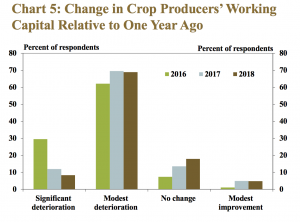 And with respect to farmland values, Thursday’s report stated that, “Alongside lower farm income and declining liquidity, a majority of bankers expected farmland values to decrease in the next quarter, but at a slower pace than in previous years. Similar to expectations for farm income, bankers in Nebraska, Kansas and western Missouri were also most pessimistic about the outlook for farmland values.  Despite predicted declines, further deterioration of farm finances and rising interest rates, nonirrigated farmland values across the District decreased only 2 percent from a year ago.” 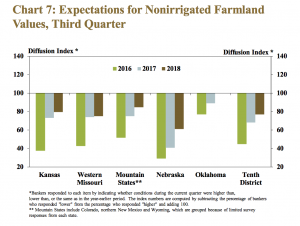 Also last week, the Minneapolis Fed indicated in its Third-Quarter 2018 Agricultural Credit Conditions Survey that, “But low crop prices and trade woes dealt a financial blow to farmers from July through September 2018, according to the Federal Reserve Bank of Minneapolis’ third-quarter (October) agricultural credit conditions survey.

“Land values were stable on average across district states, and interest rates on loans rose modestly from the previous quarter. The outlook for the fourth quarter is similar, with lenders in the district generally expecting farm incomes to decrease further.”

The report stated that, “Reflecting tighter budgets for farm households, the rate of repayment on agricultural loans fell on average, while renewals increased slightly.”

While addressing land values and cash rents, the Minneapolis Fed noted that, “The average value for nonirrigated cropland in the district actually increased by slightly less than 1 percent from a year earlier, according to survey respondents. Irrigated land values increased slightly less, while ranch- and pastureland increased a little less than 3 percent on average.

Looking ahead, the report added, “The outlook for the fourth quarter of 2018 was downbeat. Across the district, 61 percent of lenders expected farm income to decrease, while only 4 percent expected increases.”